Welcome to our first blog post! We have been so touched by those who’ve been a part of creating the Agora Grand Event Center and by those who have entrusted us to host their weddings and celebrations. So we wanted to keep you in the loop and provide some useful information, wedding tips, and just some fun facts about weddings, the Agora Grand, and Maine.

Today’s topic is how to open a new wedding venue from an old church, but really it’s about starting a new business in general. Here are a couple of truths I’ve learned along the way.

Starting a new business is absolutely overwhelming. Its success depends entirely on you and there are a thousand little bridges you have to cross to make it to the finish line – a single failure could kill the project. Being an entrepreneur is not for the faint of heart. You’ll need plenty of courage – or, if you have none, then perhaps some liquid courage? – as well as plenty of energy and persistence.

Here is a picture of the view I had when I first decided to purchase the former St. Patrick’s Church. Some things that actually went through my head: “How do I get up there to repair the windows? How much will it cost to repair the masonry? What if the tower falls down?” Yes, I actually had these thoughts. I signed the Purchase Agreement anyway. 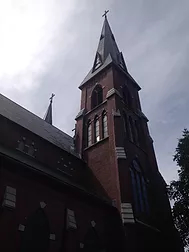 2. Be driven by passion, not profit.

We often think of business owners as wealthy, but that’s because of a self-selection bias. Most of the businesses that exist are the ones that are succeeding while the ones that failed aren’t around anymore. So assuming your business is around in 20 years, there’s a decent chance you’ll be doing well financially. But as a start-up, it’s quite likely that you’ll fail, and failure doesn’t just mean not becoming wealthy, it means losing a lot (or all) of your savings in the meantime.

I bought the former St. Patrick’s Church because I loved it. It is one of the most beautiful buildings I’ve ever seen and it had so much potential. I had no idea what I’d do with it and I never even considered the profit component until it was time to create a business plan for financing. We’re not quite in profit mode yet (as we just opened this year) but when we get there, we plan to reinvest that profit back into the building and business.

Every project is just a series of problems to solve. Challenges. And every challenge can be met in a variety of ways, some more creatively and efficiently than others.

Here’s an example. After St. Patrick’s closed, the Roman Catholic Church had removed the copper from the beautiful pipe organ, rendering it useless. As we started demolition, we found hundreds of incredibly intricate pieces of wood that were used to pass air through to the various pipes. Instead of throwing them away, we decided to creatively reuse these pieces to build the bar. We also incorporated some of the pipes into the balcony lounge. 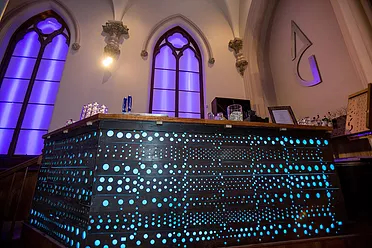 You’ll get wildly different opinions about everything from everyone. Be skeptical of what you hear, particularly about the market for your business and the costs of renovations and upstart. Don’t dismiss any opinions, but instead get lots of opinions and consider them in the aggregate. And trust your intuition. When someone tells you that something can’t be done, or that it will cost more than you expected, be prepared to ask why. They may be making invalid assumptions.

For example, when I was first renovating the Kelsey Mansion (which is now the Inn at the Agora), I received quotes between $25K and $45K to either repair or replace the existing low-efficiency oil furnace. As an engineer, I did my own calculations and discovered that a smaller high-efficiency gas furnace would do the trick. It did. Not only does it cost 40% less to operate than the old oil system, but it’s total cost? $7,500.

6. When you trip, scream and cry all you want. Then get back up.

I’m reading Grit by Angela Duckworth right now, a bestseller on the psychology of success. Her definition of “grit” is basically a combination of passion and persistence.

I’ve wanted to walk away from this project a thousand times. Licensing problems. Contractor issues. Financial hurdles. Regulatory roadblocks. Marketing struggles. I’ve had emotional breakdowns, fatigue to the point of collapse, and debilitating fear. For some reason, after a little therapeutic kicking and screaming, I always get back to work. We officially opened on May 7 and it never would have happened without an irrational persistence.

7. Take pride in your work and love the venue like it’s your baby. It is.

I don’t know and don’t care whether the Agora Grand will profit. All I know is that I love what it has become. Ryan Rhoades (our lead carpenter) and I have taken enormous pride in every part of the renovation, from the funky backlit bar to the custom bathroom stalls to the restored stained glass to the unique and luxurious balcony lounge. And Jan Barrett (our innkeeper) and I have taken enormous pride in the beautifully restored and furnished Inn at the Agora.

So there you have it! Everything you need to know to start a new business. That’s right – work nonstop and forget about profit! Seriously, though, starting a business will provide a profound meaning to your work. You will hate the work at times but, trust me, you’ll also love it more than you could imagine.

And thank you to everyone who has been a part of this project!

The Best Wedding Venues in Maine